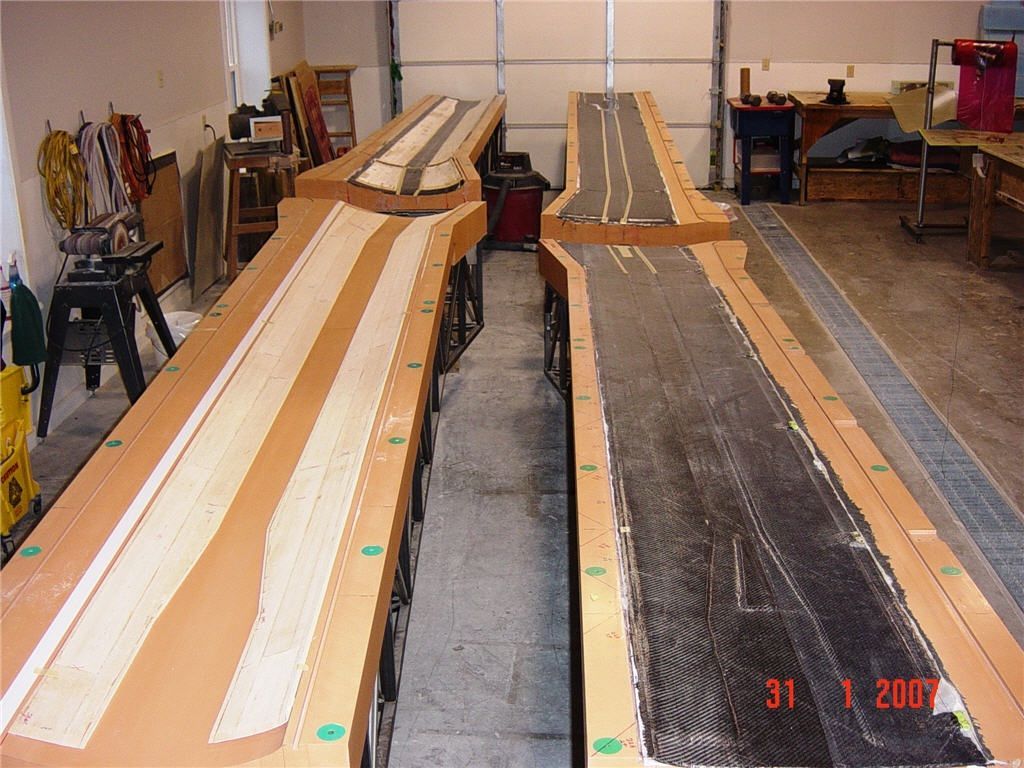 Simultaneously with the build of the fuselage and vertical stabilizer, Christian Streifeneder and his father Hanko were busy in Germany building wing molds for Concordia. In hindsight one of the smart decisions made by Butler and Waibel was to convince the Streifeneders to be a part of the Concordia team and let them build the wing molds. Butler and Waibel received quotes from different mold building companies in the U.S. who had done similar projects but never a large sailplane wing. Even though additional costs were incurred in shipping the molds from Germany to the U.S., the expense was far overshadowed by the positive things the Streifenders brought to the program. Since the Streifeneders had built molds for many other prototype sailplanes, including the ETA supership, they knew all the tricks for fabricating  molds with accurate contours, ones which remain stable over time, and are user friendly to the builder. From the start of the wing program, Christian has been very instrumental in the wing construction, from supervising the alignment of the molds in the U.S. to follow-on construction of various wing and spar panels as the program progressed. As this is written, the wing inner panels are closed and the goal is to close the outer panels by Spring, 2011. The process of building the wing panels up to this point is presented in the photos which follow.

Wing molds under construction in the Glasfaser-Flugzeug company owned by Hansjoerg Streifeneder in Grabenstetten, Germany. The molds are fabricated from high density foam and cut with a three-axis NC milling machine. The molds are subsequently mounted on rigid steel trusses to ensure the integrity of the airfoil and planform shape. The coordinates for the airfoil and planform were provided by Johannes Dillinger as part of his thesis work at Delft University.

In this photo, Butler and Waibel are inspecting the molds prior to traveling to the World Gliding Championship in Sweden in 2006. From left to right are Johannes Dillinger, Dick Butler, Gerhard Waibel and Christian Streifeneder. Johannes and Christian worked closely on the mold building to ensure that the molds correctly represented the airfoil and planform designed by Johannes.

The molds were shipped to the USA in the fall of 2006 and shortly thereafter Christian Streifender visited Tennessee to supervise the alignment of the wing molds. An important part of the initial and follow-on building of wing skins and spars and control system installation is to get proper alignment of the wing molds while maintaining the required dihedral, angle of attach, and interface with the fuselage. The alignment must also be achieved in a manner that can be repeated at any time during the course of construction. Christian was very instrumental in developing a method for ensuring this repeatability of alignment at any time during construction.

This photo shows wing skins of upper and lower surface inner panels at various stages of construction. As can be seen, balsa is also used as the core material for the carbon sandwich for all the reasons previously noted in the sections describing the vertical stabilizer and fuselage builds.

This photo shows the upper skin complete and gives an indication of the 57 to 1 aspect ratio of the finished wing.

4 thoughts on “Building The Wing Skin”